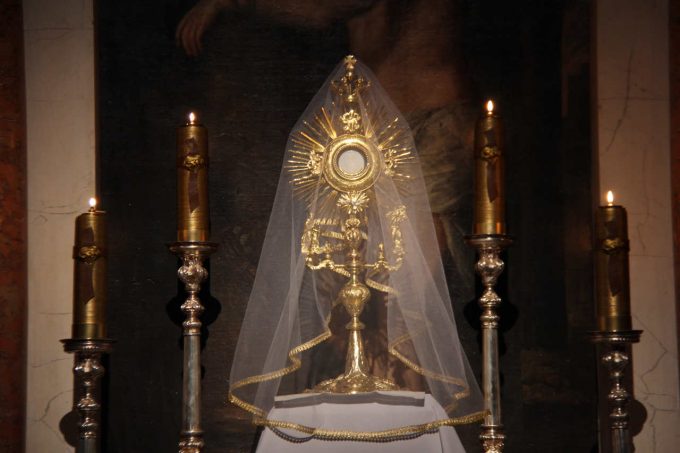 I have been using the image attached to this post for a few weeks now during my meditation.  It has proved to be quite inspiring and I now have a small copy of it at the base of the crucifix when I am saying Mass.  It certainly brings home to me the Church’s understanding of role of the priest acting ‘in persona Christi.’ 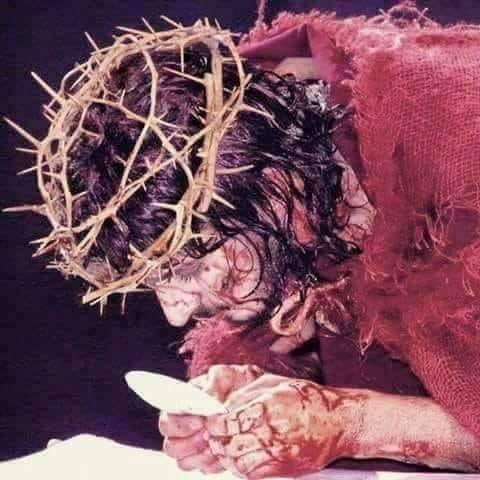 It is interesting to observe how over the centuries different nuances have been given to the words we use to describe the celebration of Mass.  We are all too familiar with the wording inside Mass Cards – ‘The Holy Sacrifice of the Mass will be offered for………’  Nowadays there is a tendency to play down the sacrificial aspect of the Mass and we speak of ‘community celebrations’ and even ‘eucharistic meals’. No matter what our emphasis we cannot get round the fact the Mass is the Sacrifice of Christ on Calvary. The Mass is a Sacrifice because it is a participation in the one Sacrifice of Christ, which is made present through the Eucharistic liturgy. Christ died for our sins once and for all, and his one perfect Sacrifice atones for all our sins for all time.  Because of this, there is no need for the Temple sacrifices of the Old Law, where animals or goods of the harvest were burned in atonement.  Yet the Eucharistic liturgy of the Church—the Mass, or Divine Liturgy—remains a holy Sacrifice because it is a sharing in the one Sacrifice of Christ, which is re-presented, or made present among us, each time the Eucharist is celebrated.  (Cf. Catechism of the Catholic Church 613-614, 1382, 1545)

When Christ consecrated the bread and wine at the Last Supper, he instructed his Apostles, “Do this in remembrance of me” (Lk 22:19).  The idea of remembrance, or memorial, in this context refers not to the mere calling to mind of a past event but rather a re-living, or a re-presentation, in a mystical way the event of Christ’s eternal Sacrifice on the Cross.  “The Eucharist is thus a sacrifice because it re-presents (makes present) the sacrifice on the cross…. The sacrifice of Christ and the sacrifice of the Eucharist are one single sacrifice” (Catechism of the Catholic Church 1366-1367).  (Cf. CCC 611, 1323, 1330, 1545, 1566)

When we come together to celebrate Mass we do so as a community and we often place emphasis on this.  The priest in presiding over the liturgical assembly addresses the congregation as brothers and sisters and within the introductory rites includes himself very much as part of that community assembled to worship. ‘My brothers and sisters to prepare ourselves to celebrate these sacred mysteries let us call to mind our sins’.

In this context it is interesting to note that in the celebration of the Mass the priest only speaks in the first person at one point during the entire liturgy when he utters the words of Our Lord at the Last Supper ‘This is MY body,  This is MY Blood.  Here is the priest acting in the person of Christ in offering his own body, like Christ for those he serves.

So in each celebration of Mass the priest, like his Divine Head, gives himself utterly, totally and completely for those he has been called to serve.