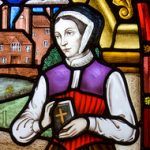 Handing on the gift of life to your child means not only bringing them to birth but helping them grow. It is not just a matter of “getting the baby done”! Nor is it just about a family celebration or getting a place in a Catholic School. To hand on the gift of Faith to our children is to help them grow spiritually. To have your child baptised is to set them on a journey, an adventure, a relationship with Jesus. That journey will, we hope, lead them to heaven! But it also has the potential to give them joy and a firm foundation for their lives on this earth.

Our parish community is delighted that you are taking this step for your child (or are at least thinking about it). You only want the best for our children and giving them the gift of Faith and the promise of eternal life is the most important gift you can give.

The first thing is to come along to Mass either Saturday night or Sunday morning in either church of our parish and have a quick word with Fr Francis and he will give you a baptism application form. There is an expectation for you to attend Mass for at least six weeks before any arrangements can be made. During this period Fr Francis will try to visit you at home. After this there will be a baptism preparation session to attend at the presbytery where you will look at what happens at the baptism ceremony together with our parish catechists.

For Catholics, the Sacrament of Marriage is a partnership between a man and a woman “of the whole of life (totius vitae consortium) and which is ordered by its nature to the good of the spouses and the procreation and education of offspring.” The effect of the sacrament is an increase in sanctifying grace for the spouses, a participation in the divine life of God Himself. Marriage is not simply a legality but a vocation.

If you have recently become engaged and are seeking information about getting married in Holy Family Church or Sacred Heart Church, congratulations!

In asking to be married in the Catholic Church, you and your future spouse are publicly proclaiming your faith in the Lord Jesus Christ and asking to live as disciples of Christ in the Sacrament of Marriage. The sacred liturgy of your wedding, which begins your married life by the solemn exchange of marital consent, is above all else an act of worship; and we will help you prepare both for that happy day and for the lifetime of marriage that follows your nuptial liturgy.

Catholics can marry non-Catholics. The Church does require baptized Catholics to marry in a Catholic Church whether the spouse is Catholic or not. The person the Catholic is marrying does not have to become a Catholic, since it would be wrong for someone simply to convert to Catholicism simply in order to marry.

With regard to Catholics marrying someone who has been married before, then speak to Fr Francis as to marrying in Church. There are all sorts of different situations that arise and the Church as specific answers to them. It is best to have a chat with Fr Francis about your specific situation.

The Church requires that engaged couples attend a pre-nuptial weekend course in the six months prior to their marriage.

The best plan of action is to make contact with Fr Francis at least six months beforehand to discuss your marriage plans.

If you are looking at this section of the website it probably means that you are trying to plan a funeral for a family member or friend.  As a parish community may we offer our condolences and the assurance of our prayers at this sad time.

In the course of life, probably the hardest thing is to face the death of a loved one. Jesus himself shared in this grief—the scriptures tell us that He wept at the death of His friend, Lazarus. But Jesus, by His own death and resurrection, has promised us something more—that in death life is changed, not ended, and as we leave the body of our earthly dwelling behind, we gain an everlasting dwelling place in heaven.

The time after a death can be devastating and difficult. The Church is here to help. Initially please make contact with an undertaker of your choice who will then contact Fr Francis to discuss a date and time for the funeral.  Once this has been done Fr Francis will contact you to make arrangements to meet and plan the Funeral Mass or Service. This will include choosing hymns and readings for the Mass as well as you sharing memories of your loved ones with him.

‘Life is a journey that does not end with death. In our faith, we believe that Jesus—by His own death and resurrection—has opened the Way to eternal life through Him. When we celebrate a funeral in the Catholic Church, it is filled with hope in a future as yet unseen, where we will live with God for all eternity. We remember and mourn for the loved one we have lost, but above all we pray—for peace and rest, for comfort and hope, for endless life in Jesus’.

Arrange an Anointing of the Sick

‘Are there any among you who are sick? Let them send for the priests of the Church.  Let the priests pray over them anointing them with oil in the name of the Lord and the prayer of faith will save the sick person and if they have committed any sins their sins will be forgiven them’.

This quotation from the Letter of Saint James gives us the basis for celebrating the sacrament of the sick.

As the name suggests it is for those who are sick! Any Catholic who is gravely ill, or facing serious surgery, or even struggling with mental illness, can and should receive this Sacrament, possibly many times, so that Jesus may help them in time of need. The Sacrament can be celebrated at home or in church.  Just have a word and it can be arranged.

If you wish to receive this Sacrament then please make contact with Father Francis.  If you or a relative is already in hospital then ask the ward staff to contact the Hospital Chaplain who will be happy to celebrate this Sacrament with you in hospital.

In the case of emergency, if you cannot contact the Parish Priest please get in touch with a neighbouring parish, or (in absolute danger of death situations) contact Fairfield Hospital for the priest on call.